The Fundamentals Of Great Picking

Todays lessons is about The Fundamentals of Great Picking.

Great picking is such an essential skill for the rock guitarist, it is the foundation of great rock guitar playing so its incredibly important to dedicate study and time to establish this technique.

Established picking is everything. It doesn’t matter whether you like to play fast and fiery, or slow and melodically, great picking is the life blood of rock guitar.

Picking is one of those techniques (like most of the crucial techniques) that is never really given a second thought, most guitarists view it as something that is straight forward and trivial.

“You just grab the pick and hit the string with it, right?”

There are so many elements that comprise great picking and if any of them are lacking, guitar players can develop picking inefficiencies that they aren’t even aware of. Remember, you are only as strong as your weakest link.

I am encountered time and time again by guitar players struggling to become the player they want to be because of picking problems they don’t even know exist. All because they viewed picking as straight forward and trivial.

Unfortunately, thats what a majority of guitar players are when it comes to the not so straight forward and trivial subject of picking. The good news is that when something is learned, it cannot be unlearned, and in this lesson you will learn the fundamentals of great picking and how to apply them into your playing.

The Fundamentals Of Great Picking

The Fundamentals of Great Picking are but are not limited to:

Alternate picking is when you alternate between down strokes and up strokes when changing strings.

This is the Alternate picking formula, you will repeat this formula of alternating between starting three notes per string lines with down strokes and up strokes on all strings.

You would repeat this formula through all strings, leading with a downstroke when ascending, then repeat the same formula for descending except you will be leading with an up stroke. This economy of motion is where economy picking gets its name.

I personally advocate economy picking because I like the way it removes excess movements, but its not necessarily which style of picking you choose that’s important, its how well you master it.

Your pick is the starting point of effective picking. Your pick is the conduit by which all your great ideas will be channelled. It is your foundation, it is the only thing between you and your guitar, it is the judge, jury and executioner that will either allow or condemn great guitar playing.

If your pick is not designed for optimum picking potential, or at least the picking potential you want, then you need to find one that is. I cannot stress this enough, the pick you choose to play with will either hinder or help you and either make or break your playing.

You can only play as well as your pick will allow.

I have read, heard and seen countless interviews with rock guitar greats who have admitted they can get by with pretty much any guitar or amplifier, but without their chosen pick they can’t play.

A good pick will be different for every guitarists, but a good pick will allow you to play what you want to play with ease and command. The pick design that has been universally recognised as the one that is most likely to allow this is a pick that is pointed with some amount of stiffness and not to thick.

A pointed pick will allow you to glide from string to string with ease, it will also produce a better sound. A pick with a certain amount of stiffness will not flop around, giving you more control over your picking. The pick you choose doesn’t have to be as stiff as a board if you don’t want it to be, but it must have some amount of stiffness because effective rock picking inst achieved with picks made of paper.

A pick that isn’t to thick will glide through strings easier with no resistance and allow a lot more picking control. Thick picks require a lot more effort to pick through strings. Also, a pick without a glossy finish and more of a tortex feel will be easier to grip and less likely to become slippery.

I personally use Jazz H3 tortex picks made by Dunlop. What ever pick you choose doesn’t matter, so long as it is pointed with some amount of stiffness, and not to thick. I also recommend no glossy finish and more of a tortex feel.

Having the right pick is one thing, holding it is another. The way you hold your pick is everything.

Holding the pick for optimum picking potential is crucial for effective picking, how you hold the pick can have a huge bearing on the ability you are able to acquire. Again, this is a picking fundamental largely overlooked by a lot of guitar players because they believe it to be of little importance.

Remember, there are a lot of fundamentals that create great picking, and you are only as strong as your weakest link. Holding the pick in an inefficient manner can cause picking problems that guitar players aren’t even aware of.

The biggest one of these is snagging, this is when the pick is held at an inefficient angle to pick through the strings smoothly and as a result snags against the strings, disallowing any fluent picking at all. Another is when players hold the pick so the point of the pick does not point directly into the strings, instead its on a funny angle, this can also cause snagging.

The best way to hold your pick for optimum picking potential is on an angle to the strings, with the point of the pick pointing into the strings. I also recommend holding the pick between the outside of your fore finger and the print of your thumb with about a Cm or so of the pick point protruding for string contact.

Holding your pick on an angle to the strings will allow the pick to glide through the string with every down and up stroke, if the pick is not angled to the string, and it falls flat against the string when picking, this can cause snagging.

Holding your pick between the print of your thumb and the outside of your fore finger with about a Cm or so of the pick point protruding for string contact will allow the most control over your picking. 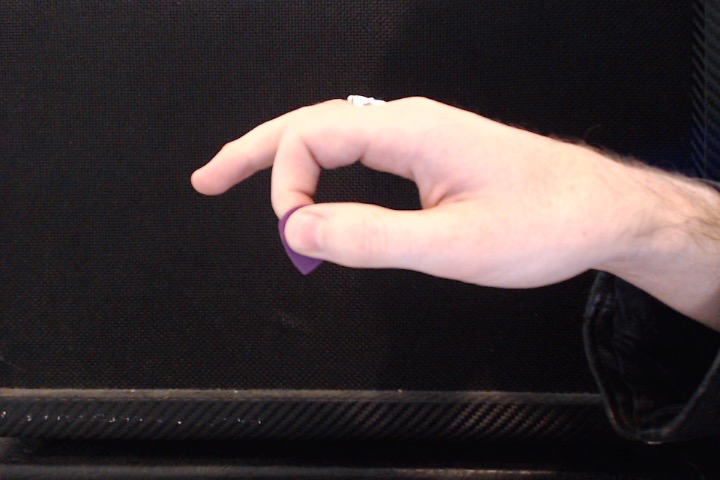 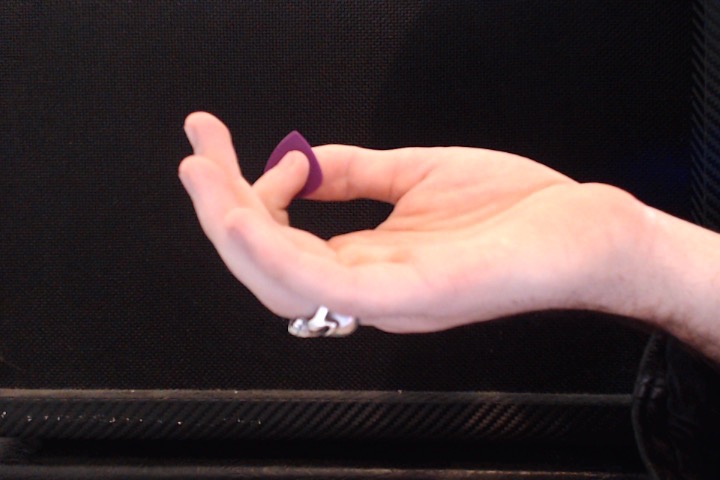 How you hold and fret the strings when picking is very important, your fretting hand is where great technique comes from so its crucially important to understand the fundamentals that comprise great fretting technique.

The thumb must be in the back of the neck inline with the second finger and the fingers must be curved at both eh knuckle and the distal joint (the bend above your finger nail) allowing your finger tips fully to access the strings. 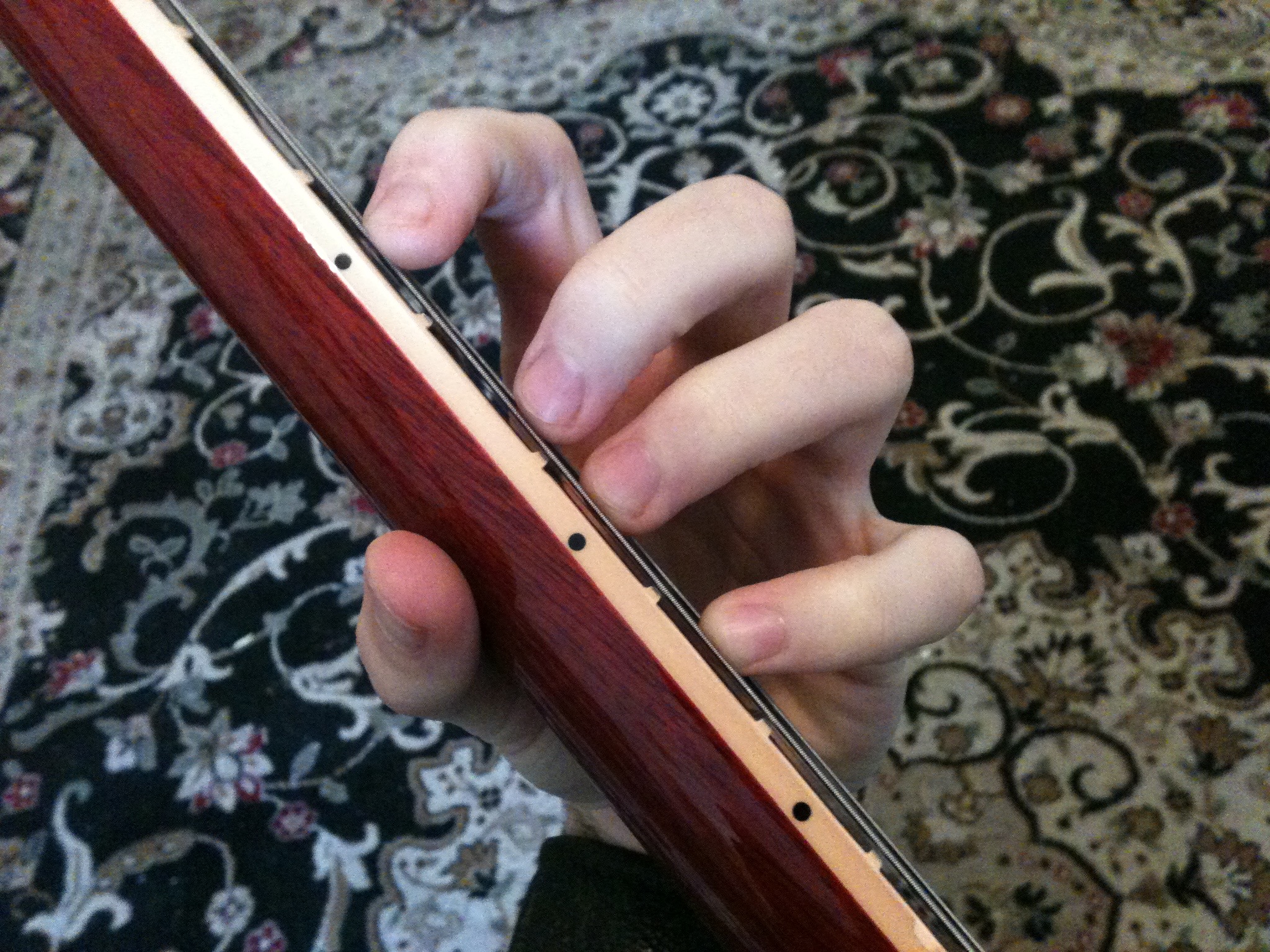 Keep Your Fingers Close To The Fretboard

Keeping your fingers close to the fret board is a largely overlooked technique that is critical for effective fretting. This simple yet crucial technique will allow you to play faster and more accurately with better control and more ease.

Let’s apply this technique to the same natural minor scale we were playing before.

As you ascend and descend through this scale, focus on keeping your fingers nice and close to each string.

Now we are going to talk about one of the most important elements of guitar playing, tension.

Tension is the enemy of great playing. It will cause both your fretting hand and picking hand to seize up and it will stop you from playing the way that you want to.

When ever you play, what ever you play, you must always do so managing the tension in both your fretting hand and your picking hand. But what should you look out for when attempting to manage playing tension? And how will tension manifest itself?

Tention tends to manifest in both playing hands as well as the forearms, upper arms, shoulders, abdomen, legs, neck. it can be bought on by a myriad of different things, some of the most common include straining, gripping the pick and guitar neck to tightly, tensing shoulders and arms, tensing feet and legs as well as holding your breath.

Tension can also be a sign of not being able to comfortably handle a certain speed, poor playing technique, pressing strings to hard and becoming over excited or nervous when playing.

Tension management is achieved by training your hands to play tension free, strive to practice with your hands as relaxed as possible under all conditions. As you play, continuously remind your hands to relax, always be conscious of accumulating tension, combat this by taking yourself and your hands to a state of relaxation when you play.

This may sound like hippy nonsense, but believe me it works.

You can train your hands and mind for tension management by practicing licks and exercises slowly focusing on keeping your hands tension free, then building up the speed as you become more and more comfortable.

Lets now take a look at some exercises designed to train your hands and mind for tension management.

Pick In A Straight Line

A very important picking technique to master is rep-positioning your arm and hand as you change from string to string so that you can ascend and descend when picking in a straight line from the low E string to the high E string.

You will need to reposition your arm and hand so that it is centred on each new string so that you can ascend and descend from bottom to top in a straight line in between the pick ups.

Practicing this technique will nurture a smooth and even picking style, elevating any picking discrepancies that can be caused by ascending and descending in arcs, or at angles to the strings.

Lets’ play our A natural minor scale again focusing on keeping our hand centred over each string, and picking in a straight line up and down.

I hope you have enjoyed this lesson and had your eyes opened to all the crucial elements of one the the guitar worlds misunderstood techniques, picking.